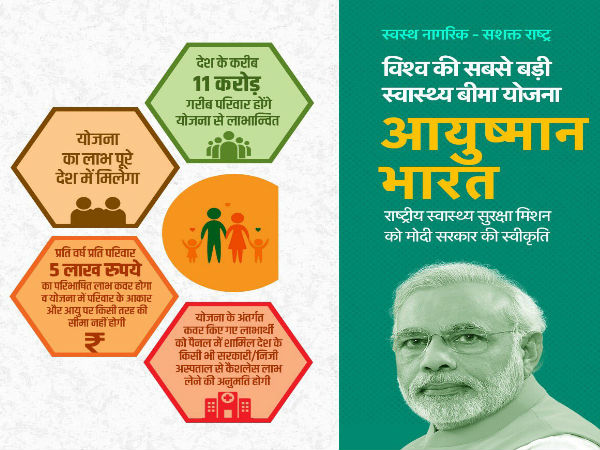 Prime Minister Shri Narendra Modi, in his Independence Day speech of 2018, announced the launch of the Ayushman Bharat-National Health Protection Scheme (AB-NHPS). He said that the national health insurance scheme will be rolled out on a pilot basis in some states. The full-scale roll-out of the project is expected to be in September end.

According to the various government websites, here is a look at what the health insurance scheme is all about. Who is the AB-NHPS aimed at?
The scheme is targeted at poor, deprived rural

families and identified occupational category of urban workers’ families. So, if we were to go by the Socio-Economic Caste Census (SECC) 2011 data, 8.03 crore families in rural and 2.33 crore in urban areas will be entitled to be covered under these scheme, i.e., it will cover around 50 crore people.


no cap on the family size and age under the AB-NHPS. The scheme will be cashless and paperless at public hospitals and empanelled private hospitals.


How will the entitlement be decided?
AB-NHPM will be an entitlement based scheme where it will be decided on the basis of deprivation criteria in the SECC database. The beneficiaries are identified based on the deprivation categories (D1, D2, D3, D4, D5, and D7) identified under the SECC database for rural areas. For the urban areas, the 11 occupational criteria will determine entitlement. In addition, Rashtriya Swasthya Bima Yojna (RSBY) beneficiaries in states where it is a ..


Also, these families in rural areas having any one of the following will be automatically included: households without shelter, destitute, living on alms, manual scavenger families, primitive tribal groups, and legally released bonded labour.